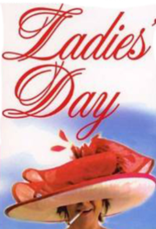 An hilarious modern comedy drama set in the North of England in 2005 when Ladies Day was temporarily moved from Ascot to York. Giving four "Ladies", spanning two generations ,  from a fish packing plant in Hull a possible opportunity to rub shoulders with the royalty and the rich and famous in an unfamiliar social environment.

But all is not as it seems as the drink flows, inhibitions and other things get lost a web of back stories, intrigue, love interest, infidelity and hidden problems.  All flowing together in drama that is at turns comic and poignant. There are surprising, and not so surprising, twists along the way building to a triumph, of sorts, in the end.

This is a drama written with 4 fantastic leading roles for women and a host of supporting cameos for the men. It has that gritty "northerness" associated with other Hull Truck Theatre Company works that we have produced and have been enjoyed by the audiences. We have a strong cast with some surprises in production and casting along the way. It will be a warming start to your run up to Christmas. BOOK EARLY!